Ever since I arrived in the Dominican Republic in July people have been raving about Jarabacoa and how much I would like it there. It is a city in the mountains, close to La Vega and Santiago. It is about a two and a half hour bus ride from Santo Domingo, or from Sosua. With my various changes in plans during my trip, I hadn’t really ‘planned’ a trip to Jarabacoa, I was just hoping it would fall into place … and it did! One weekend our school excursion was a rafting trip in Jarabacoa. I was super excited because I had never been rafting and it also gave me the chance to see a little of the community that so many people were talking about.

Indeed, Jarabacoa is beautiful. You wind your way up and down the mountains and valleys in a series of S turns. If you are the driver, you have to watch the road at all times, but if you are a passenger, in every direction you see lush greenery, beautiful mountains, rivers and valleys.

I met up with our group at about 9:30am at Rancho Baiguate where we started our day off with a big buffet breakfast. Surprisingly, including pancakes. Yum! It wasn’t a huge buffet, but it was certainly sufficient and tasty. We then watched a safety video with an overview of how to paddle and then we were off to change, get our life jackets, helmets and wet suits (optional). Of course, being Canadian, I opted to not take a wet suit. Although the guides said the water was a bit chilly, I knew that my Canadian blood would keep me warm. Besides, I was guessing it would be warmer than swimming at Lawrencetown Beach in August and I’ve done that before!

All together there were approximately 70 people heading out together for the excursion and we would all go down the river one boat after another. I was amazed that 70 of us would be all together, but it really didn’t seem like that many once we were split into our 10 or 12 rafts.

We jumped up on an open air truck and held on for our bumpy ‘five dominican minutes’ ride to the river. In actuality, I think it was closer to 15 minutes. I stayed entertained sitting between Karlos, the school ‘fun’ coordinator and one of the rafting guides. Come to find out this particular guide also has a paragliding company. I wish I could have had time for that too! 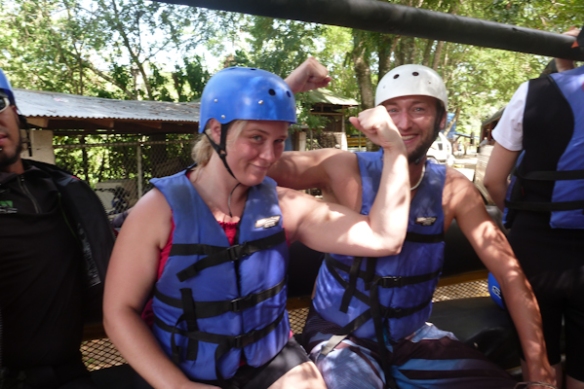 We left the Ranch, headed down a bumpy dirt road and then headed into the community. The guides played a couple of tricks on us, including surprising us as we passed by a local house and got sprayed by someone with a water hose. People on the right got their backs soaked … people on the left (like me) got water in our faces. It was good for a laugh though! And it was nice to cool off a bit.

Once we arrived at the top of the river, we all piled out, were appointed a guide (Danny), suited up and sat in our raft on dry land for a few instructions. We learned how to paddle and when to ‘get down’ in the middle of the boat so that we hopefully wouldn’t fall out. Then off to the river we went!

Here is our group heading down the river. I was surprised at how fast it was and a couple of the drops were pretty big!

I was excited about this adventure from the very beginning, but once we were on the river with the refreshing waves pouring over us, I was even more alive with excitement. My group made fun of me, but I laughed and screamed every time we went over a drop. Lucky I had a voice at all by the end of the river.

One of our group, Julene, made a special dip into the water on our first small drop. Basically she tipped over backwards and like a go-go-gadget arm our guide Danny grabbed her by the lifejacket and yanked her right back in the boat. She didn’t actually fall out because he grabbed her so quickly, but her head went in. It’s hilarious to watch on the video, but I haven’t figured out how to post just one section yet.

Julene was a good sport about it, having been the first in our crew to semi ‘fall out’. She certainly wasn’t the only one by the end of the day!

With 70 people on the river, we did do a fair bit of waiting as the rafts have to go one at a time. Luckily it was always entertaining to watch other groups come down the river too. And there were lots of fun people on the trip laughing, screaming, joking and all around being silly. There were many water wars fought by ‘paddle’ and one in awhile we had other guides or other passengers tag along with us if they fell out of their raft, or needed to continue down the river. 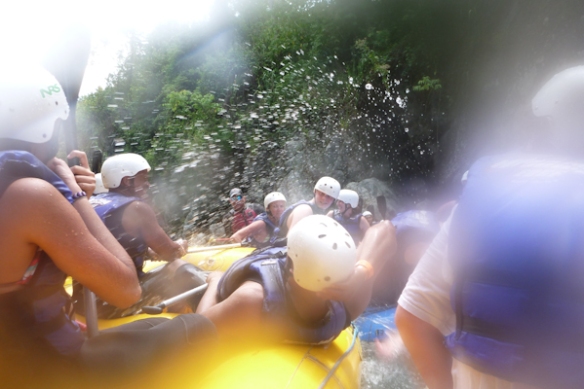 Sitting at the back of the raft near our guide, I talked to him quite a bit. When one of the other staff caught a ride and was humming a tune, I asked if they could sing for us. And, sing they did! They did duets of bachata songs down the river for the next little while. Until Karlos started singing ‘who let the dogs out, who who who’ … and then the dog on the bank returned the call will some loud barking. Then it continued with ‘who has the best guides, who who who’ … Oh Karlos! ha ha ha

At one point, about half way down the river in a calm spot, our guide disappeared into the water to let us float along, the next thing I knew he popped up out of the water behind me and pulled me out of the raft. Then pretended to save me! Ha Ha all in good fun. It was an area that we could get out and swim anyway and with the heat of the sun, the water was so refreshing! I am Canadian, I’m used to a bit of a chill in the water, so I skipped the wet suit and was glad I did!

After my little swim, we stopped for a little snack before continuing down the river. I took the opportunity to get a group photo of us! 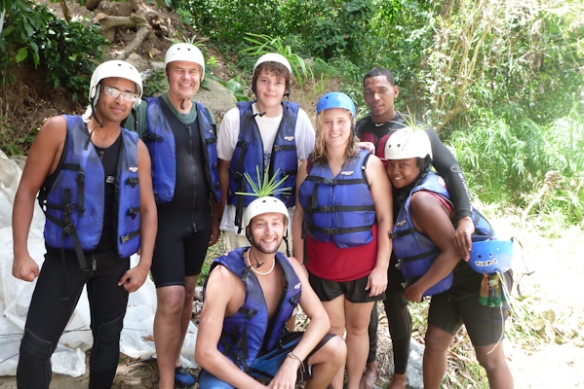 The most exciting part of our trip was about 3/4’s of the way down the river when we could see we were headed for a big drop squished in a narrow passageway between a few very large boulders. As we approached, we could see another raft at the bottom of the drop, but with the river moving fast, there’s no way to slow down or pause when you are about to go over a small waterfall.

Danny yelled ‘get down’ and we all piled into the middle of the raft.

The next thing I knew I was under water. I didn’t know if I was the only one, nor did I even realize it was happening. It was like I skipped a moment in time and went from dry in the boat to being battered by pounding water at the bottom of a small waterfall. I was under the boat, fully under water being churned and tossed and banged around between the rocks. I opened my eyes to see masses of churning water. I had a brief moment of panic as I realized that not only was I under water, but it was pounding hard all around me and I was under the boat. I had a moment to wonder if I had enough air and then I remembered that in our brief training, Danny had told us if we fall out and get flipped over under the boat, there will be air under the boat to breathe and not to panic. I hit my head a time or two off the rocks and was extremely thankful for my helmet and that I hadn’t hit the rock with my face! And then I popped up, took a breath and the water spit me forward at warp speed where I grabbed on to the boat in front of me. I remember someone asking if I was ok and as soon as I had oxygen I said ‘yes!’.

I looked around and saw Julene being helped to shore by our guide Danny. I was glad he was with her because she’s not a swimmer! Brave girl though. Karlos and Chris popped their heads out of the water and then I saw Adi, with his glasses all askew, caught between the overturned raft and the rope that is there to hold on to so you don’t fall out. How ironic! A moment later, Tom appeared. We were all a little disoriented, but we had survived!

It all happened so fast that there is no way of really knowing how it happened, but it seems like when we went over the falls the front of our boat hit the other boat and we flipped instantly. All seven of us, including our guide went under.

Once we got to a slightly calmer spot in the river, we all piled back in the boat to continue on, still catching our breath and talking about the panic. Thankfully the rest of the ride down the river was relatively calm with no more over turns … at least not for us!

The entire rafting trip was awesome. Even after panicking and being soaked and sun burning my knees, I still raved about the trip and feel that it was the best experience of my entire seven weeks. I would do it again in a minute.